Varsity Football  Highly competitive, demanding, six-game schedule with a jamboree at the start of the season.  Generally for VI and VII and some V Form boys.

Junior Football
Developmental program to teach the skills of football. Juniors practice with their coaches on the same field as the Varsity team. Generally for III, IV, and V Form boys.

Boys’ Varsity B Soccer
A competitive team with a thirteen-game schedule including one tournament. Strong emphasis on fundamentals.  Generally for V, VI and VII Forms.

Recreational Tennis (co-ed) - limited roster
This program is for beginner and intermediate players who wish to learn the game of tennis and have fun playing each afternoon. Generally for V, VI, VII Formers.

Rumsey Outdoor Adventure (ROA) (co-ed) (Fall/Spring Terms)
ROA offers students the opportunity for growth in leadership and outdoor skills while encouraging an appreciation and stewardship for our natural surroundings.  Some of the activities include indoor climbing wall, canoeing, kayaking, hiking, mountain biking and archery. Generally for IV, V, VI and VII Forms.

Bluedog Developmental Hockey (co-ed)
This program is for beginner hockey players who want to learn the game of hockey in a fun setting. This program divides skaters into small teams to play games throughout the season as well as learn all of the skills needed to advance to higher levels of ice hockey. Skaters skate on the rink and on the ponds. Open to beginner skaters in all Forms.

Boys’ Varsity B Basketball
A program with a twelve--game schedule.  This program is for beginners and experienced young basketball players.  Generally for V, VI and VII Forms.

Girls’ Varsity Basketball
Competitive fifteen game schedule. A program for girls who want to learn and excel at the game.  Generally for V, VI and VII Forms (limited roster).

Girls’ Varsity B Basketball
A program with an eleven-game schedule.  Emphasis on learning rules and fundamentals.  Generally for III, IV, V and VI Forms.

Girls’ Junior Volleyball
This program is for players who wish to fine tune their volleyball skills with instruction. There is a seven-game schedule.  Generally offered  to III, IV, V, and some VI Form.

Varsity Wrestling
Competitive seven-quad match schedule with one major tournament. Wrestlers of all abilities are included in one group.  Generally for IV, V, VI, VII Form.

Varsity B Ski Team (co-ed)
A competitive program that races with the Varsity Ski Team.  Great for beginners and experienced skiers.  Generally for IV, V, VI, VII Forms.  There is an extra charge for a season pass/equipment rentals.

Recreational Skiing and Snowboarding (co-ed)
Open to all students with good academic and social standing.  This is a non-competitive program, which emphasizes fun.  There is abundant supervision and top instruction is available.  This group skis five days a week at Mohawk Mountain, Cornwall, CT.  Generally for V, VI, VII Forms. Written permission to ski must be in the office in advance of the Winter Term or the student will be placed into a competitive sport.  There is an extra charge for a season pass and equipment rental.

Girls’ Varsity B Lacrosse
Competitive eight-game schedule. This program is designed to teach new players the game of lacrosse. Players will learn the fundamentals of the game to help them advance to a more competitive level in the future. Generally for III, IV and V Form girls.

Varsity B Baseball
Twelve-game schedule.  This is a program that teaches the fundamentals of the game. Generally for IV, V, VI and some VII Form boys.

Varsity Softball
A competitive schedule of thirteen-games played on a regulation field, with fast pitch rules. Depending on the size of the team, there could be developmental players that practice with this program. Generally for IV, V, VI and VII Form girls.

Varsity A Tennis (co-ed) - limited roster
Students are required to try out for this competitive team.  This highly competitive tennis program carries only twelve members due to limited court space. There is a twelve-match schedule. Generally for superior players in the IV, V, VI and VII Forms.

Varsity B Tennis (co-ed) - limited roster
This team still requires a tryout. Experience is expected. This is not a beginner level program. The second tennis team plays a ten-match schedule.  Generally for III, IV, V, VI and VII Forms.

Varsity Crew (co-ed) - limited roster
Unique to Junior Schools for students in V, VI and VII Forms.  Many races against prep school crews including the “Lower Boat Regatta.”  This program has expanded into a very competitive and exciting sport at Rumsey (limited roster).

Future Rowers (co-ed)
This program is for IV and V Formers who are interested in learning about Crew. Practice takes place in our rowing tanks and on the indoor ergs.

Mountain Biking (co-ed)
The Mountain Biking program is designed for students who are novice to advanced. The students ride on various trails around campus and in the local area. The team may compete in 1-2 races based on interest and ability level. Students may use their own mountain bike and helmet for this program. Rumsey does, however, have several mountain bikes and racing helmets available for use by students for the season. for a nominal maintenance fee. 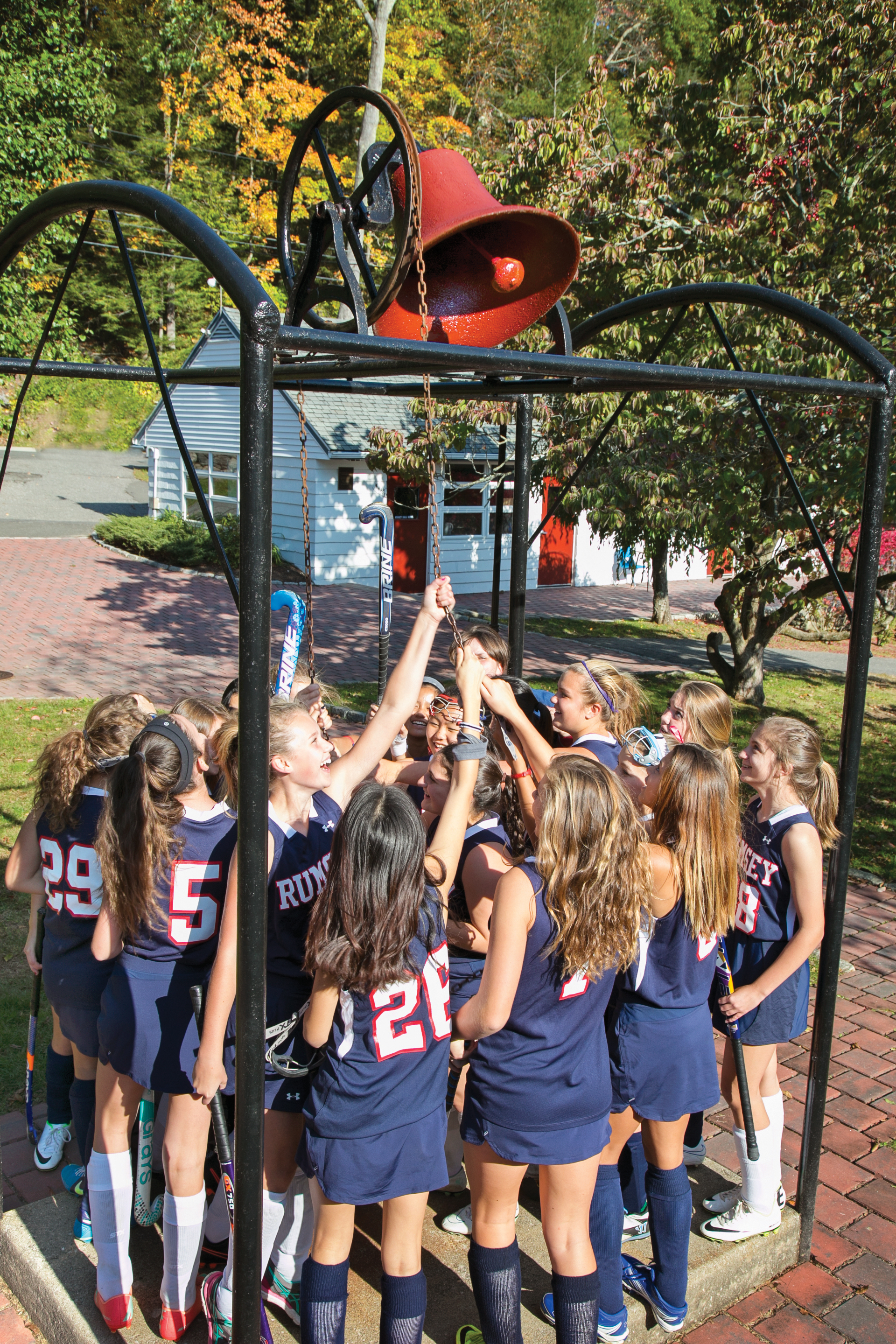 The sound of a bell ringing throughout campus means one of Rumsey’s athletic teams has won a competition!